Projektgruppe "Design & Implementation of a HexaPod" Figure 1: 3D-Simulation of a HexaPod

Hardware/Software Co-Design is very important to find a good balance between performance and cost during system design. For an early analysis and validation of the desired system properties, simulation models and hardware prototypes play a major role.

In this project, a HexaPod will be designed from scratch to deepen your experience in Hardware/Software co-development. A HexaPod is a robot with six legs, where each of the legs can moved using three motors. A 3D-Model can be seen in Figure 1. For a successful completion of the project, a set of mandatory functionalities must be realized, and the implementation must be possible with a given budget. Extensions are possible as long as the budget is not exceeded.

After the detailed specification of the robot, a lot of decisions have to be made during the design phase, such as for example: Which functionality has to be implemented in hardware and which can be implemented in software? Which hardware-platform should be used to implement the needed functionality in hardware and in software? Does the project keep the budget?

Also, questions of electrical engineering have to be solved, e.g.: How to design the power supply? Which motors should be used? How to handle the power consumption of the motors?

After designing the HexaPod hardware, a 3D-Model of the HexaPod has to be implemented using Blender. On the one hand this model should be used to print necessary hardware, on the other hand it will be used to simulate the behavior of your developed software. Therefore, the same communication interface has to be used for the 3D-Model and the real HexaPod. 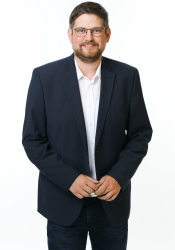