They are indispensable in modern consumer electronics and communications technology: fast digital-to-analogue converters. Anyone who wants to receive digital television or listen to digitally stored music needs them - as the name suggests - to convert digital signals such as those from a radio station into analogue ones, i.e., the audible. Both a wide bandwidth, i.e., a widely measurable frequency range, and a high resolution, i.e., the accuracy of the signals, are crucial for good transmission quality. However, as soon as one of these increases, the other automatically decreases. Current technology is therefore reaching its limits. Paderborn and Braunschweig scientists are working together to find a solution to this conflict. Their goal is to overcome physical limitations in signal processing and develop new methods for converting the signals. Instead of relying on purely electronic solutions as in the past, the researchers are relying on electronic-photonic, i.e. light-driven, concepts. The new system is designed not only to multiply the signal bandwidth - and thus increase resolution - but also to fit on a single chip instead of being processed in a complex device, as was previously the case. The advantage is that such a small chip is less expensive, more suitable for mass production and can be flexibly integrated into other devices.

The German Research Foundation (DFG) is funding the "Precise Optical Nyquist Pulse Synthesizer DAC" (PONyDAC) project, which started in 2019, as part of the Priority Program "Integrated Electron-Photonic Systems for Ultrawideband Signal Processing" (SPP 2111). Christoph Scheytt of the Institute of Electrical Engineering and Information Technology and the Heinz Nixdorf Institute of the University of Paderborn as well as researchers of the Institute of High Frequency Technology of the Technical University of Braunschweig around Prof. Thomas Schneider are involved. The Paderborn research is being funded with around 500,000 euros. The scientists recently successfully completed the first phase of the project.

Overcoming physical limits with the help of optical effects

Transistors play an important role in signal processing. They can be found in smartphones and computers, for example. There, they switch, amplify and control electronic currents. "However, there are limitations to the bandwidth of fast transistors that cannot be overcome in purely electronic terms. This is due, for example, to the fact that a so-called jitter, also known as clock jitter, occurs with higher bandwidth. This is an inaccuracy in the transmission of digital signals. Jitter can cause a sudden and unwanted change in the signal characteristics, which leads to bit errors in the data signal," explains Christian Kress, a research associate in the "Circuit Technology" group at the Heinz Nixdorf Institute.

The research team is therefore working on a new method for faster and more powerful signal processing. The solution is to be a so-called electro-optical modulator. The idea behind it: When electronic signals are converted into photonic signals, i.e., light signals, new physical possibilities arise. Among other things, higher signal speeds are achievable, which means, for example, higher radio frequencies and data rates. "This methodology promises that you can increase the bandwidth and thus the dynamic range, i.e., the measurement capability from the largest to the smallest signal strength, by a factor of three compared to purely electronic solutions," explains Kress. As a result, he says, better resolution can automatically be achieved as well, since the two components represent a trade-off.

The scientists then plan to incorporate the photonic-electronic components into state-of-the-art silicon photonics technology. "Silicon photonics enables the combination of photonic circuits, such as optical waveguides and couplers, with integrated electronic circuits, such as amplifiers or processors. The combination of complex electronics and miniaturized photonics on one chip results in completely new methods for signal processing and communication," explains Prof. Dr.-Ing. Christoph Scheytt.

"In the first phase of the project, we demonstrated the method in parts. All the important components were integrated on silicon chips and tested in the lab. This is necessary to check what the performance of the demonstrator will be, or whether the system in the form we have devised will work at all - and it has," the scientist said. The second development phase of the project started earlier this year. Says Kress, "The measurements from the first phase were very promising. We expect the overall system to meet and even exceed the project's targeted goals. The integration of the complete demonstrator will be the major goal of the second phase." 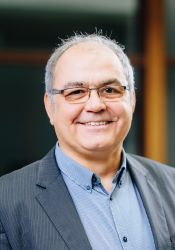